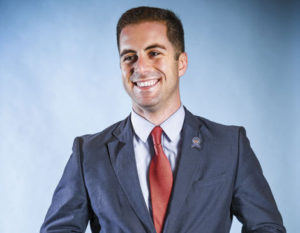 The youngest member on city council has the potential to reinvigorate the city with a progressive community-based approach to politics.

City councilman Kerry McCormack is huddled close to a portable gas-lighted heater behind an enormous stage in the epicenter of the newly renovated Public Square.

Nearby, Mayor Frank Jackson and council president Kevin Kelley are engrossed in conversation, basking in the light from the fire at Cleveland’s annual Winterfest. Soon, McCormack will join them onstage to flip the switch on more than 360,000 lights and ring in the holiday season. As he peers out into the bundled and bustling crowd, the empty shells of unused bus stations peek out over covered heads. For the first time in more than 15 years, a small ice rink teeming with children glistens near the foot of the Soldiers’ and Sailors’ Monument.

“This is what Public Square should be,” McCormack says, peering off into the night. “It should be a place for the people. This is the front yard of our city.”

At 28, Cleveland’s newest and youngest member of council understands the importance of diversity, family values and having a community-based approach to politics. As the representative for Ward 3, McCormack fills the seat of Joe Cimperman, whose 18-year tenure elevated issues of equal rights and global engagement in the civic discourse.

“I want to make sure I maintain his energy levels and his responsiveness and his passion for the community,” says McCormack, who now represents Ohio City, Tremont, downtown and parts of Clark-Fulton. “Making sure we’re on the edge of progress is really important.”

Paid for by Friends of Kerry McCormack, Josh Harrell, Treasurer